Apple vs Tesla: The Two Most Important Innovation Strategies 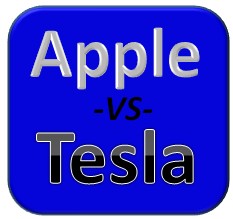 Major improvements are expected in batteries, including a pure lithium anode that might triple battery capacity in the future. The new Gigafactory batteries will have 10%-15% better capacity due to improved chemistry. The new factory will also reduce costs by at least 30%, allowing Tesla to deliver the much less expensive $35,000 Model 3 by 2017. CEO Alan Musk expects that within the next 10 years electric cars will reach cost parity with combustion engines.

Car production continues to increase and Tesla expects to deliver 35,000 cars during the current financial year. Tesla's goal is to reach a run rate of 100,000 cars per year by the end of 2015. Next spring, Tesla will release the Model X crossover SUV.  Musk expects selling as many units of the new model as the current Model S. The CEO noted that they already had a lot of orders for the Model X, despite buyers having not seen the vehicle.

As demand is currently exceeding supply, Tesla has intentionally limited the number of sales outlets and has focused on building more service locations. In China, customer's biggest dissatisfaction is the amount of time they need to wait for a car.  The company owned stores have twice the sales per square foot of Apple, the retail industry leader.

Is Tesla the next breakthrough Apple-like growth company?

Let's first look at the two most important Apple innovation strategies and second discuss how they will impact Tesla.

The iPod was not the first mobile music player. Its success is directly correlated to a platform business model. The form factor of the iPod and a much more use friendly user interface are the product's foundation.  Within 2 years, Apple sold 1 million iPods.

With the iPod introduction, Apple next focused on the platform for delivering music which became iTunes.  Steve Jobs convinced multiple record companies to let him sell individual songs for 99 cents.  It took five days for Apple to sell 1 million songs on iTunes.

The iPhone on multiple levels was an extension of the iPod.  It addition to delivering music, it disrupted mobile technology leaders such as Nokia and Blackberry through a very user friendly user interface. It took 74 days to sell 1 million iPhones.

Legendary are the stories of Steve Jobs intensive focus on the final Apple consumer user interface. Simplicity and a clear understanding of the customer's pain points were the mantras driving new technology platforms.

Fanatically, both Apple and Tesla focus their products on delivering exceptional consumer experiences.  Customers have rewarded both companies by continuing to pay a premium for their products.

Positive customer experiences are what build brand loyalty and customer advocacy.  As an example, earlier this year a video created by two fans of Tesla went viral. In the commercial, a Tesla car was the vehicle in a child's imagination on traveling to the next frontier.

Like many other traditional legacy products, the automobile is overdue for technology disruption. Multiple global convergent forces are opening new possibilities to evolve the stale business model. Tesla in the automobile has the platform on which to build the ultimate Internet of Things (IoT) connected experience.

Back in 2009, Warren Buffett predicted that by 2030 "all cars will be electric".  That prediction may have been overly optimistic, but with a platform and focus on customer experience, Tesla is positioned to be the next Apple.