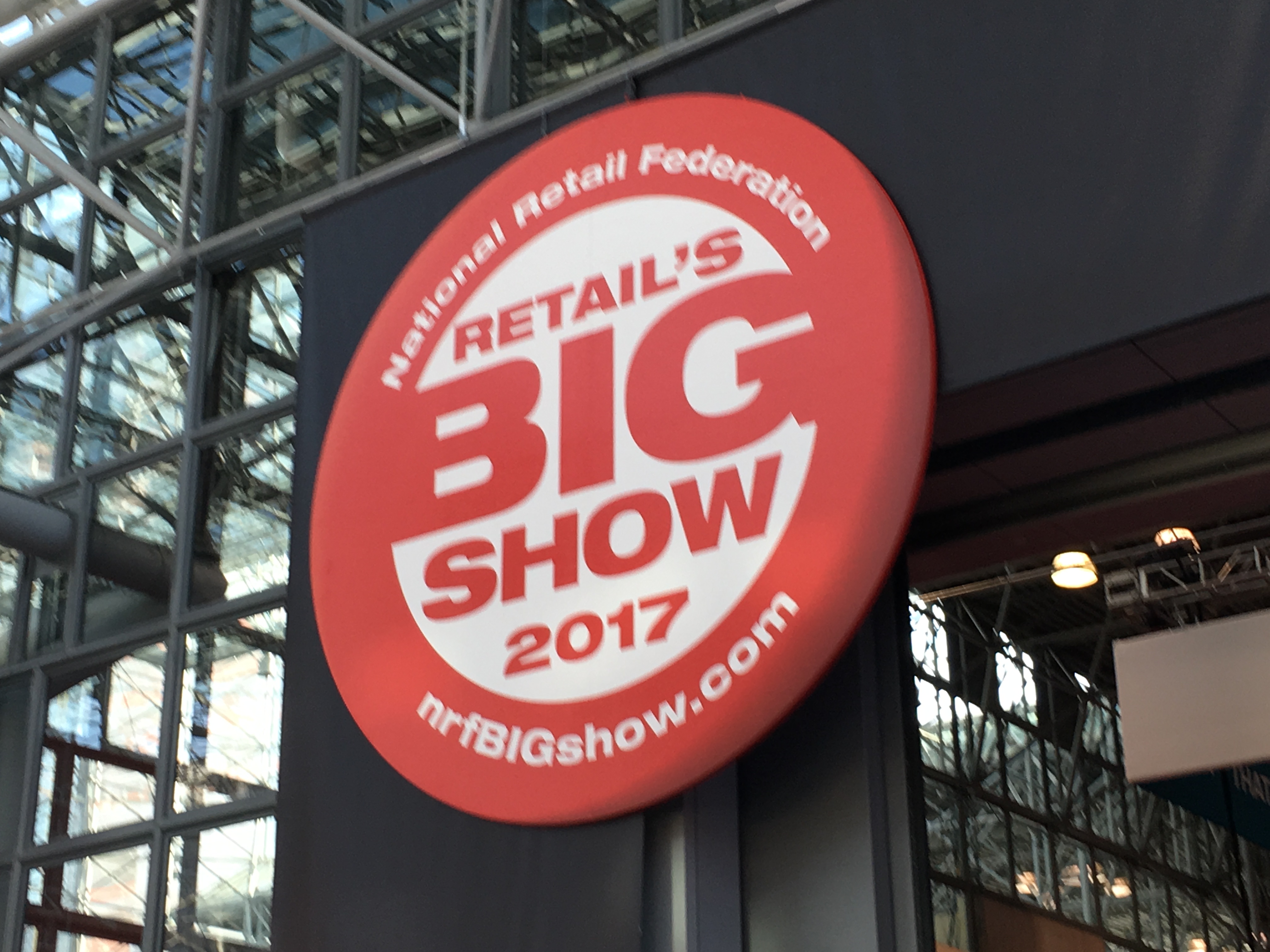 Continuing my annual tradition, following are the top ten trends spotted at NRF 2017.

The Mainstreaming of RFID

In October, Kurt Salmon reported that 73% of respondents to their large scale retail study had either implemented or were currently implementing or piloting RFID. The just released 2017 IHL/RIS Store Systems Study had retailers increasing spending on RFID 3.4%. Inventory visibility, which the technology addresses, moved to number 3 as a store systems top priority for the new year.

At NRF 2017, traditional exhibitors of RFID technologies such as Tyco Retail Solutions, Intel, Avery, and Zebra where joined by new IT players such as Fujitsu and JDA among others.  Mainstreaming of RFID for item level visibility is fully underway.

Very few NRF exhibits had the word omnichannel in their signage. New focus was on 'something' commerce, e.g. Unified Commerce or Empowered Commerce. What's the difference between onmichannel and unified commerce?

"In onmichannel, you have multiple channels, but you don't have one piece of software, one version of the truth. You have many versions of the truth. In the unified commerce world, it's all connected in real time. I just don't mean the web site, but the mobile side and the store side - all in real time."

Screens, Screens, On the Wall

Just like Time Square, screens are getting larger and more interactive. At NRF 2017, virtual and 3D visual variations increased their presence. The most important screen in retail is on the smartphone.  The gateway to the smart store is the smartphone. Wonder how consumers will adapt to all this visual stimulation. Attention spam for all of us has dropped to 8 seconds. .

Succinctly, NRF 2017 confirmed that data is the center of the new retail model. Multiple attendees lamented that the EXPO hall was a microcosm of the data explosion engulfing all industry sectors. This trend will continue. By 2020, data production will be 44 times greater than it was in 2009.

HELP, I Am Drowning in Data

The Blockchain Arrives in Retail

"A blockchain is a data structure that makes it possible to create a digital ledger of transactions and share it among a distributed network of computers. It uses cryptography to allow each participant in the network to manipulate the ledger in a secure way without the need for a central authority."

Blockchain is the technology underpinning the digital currency "bitcoin". Multiple major IT companies including Microsoft and IBM were demonstrating blockchain retail applications at NRF 2017.  Blockchain, welcome to retail.

The Retailer is the Technology Demo

In previous EXPOs, multiple of the technology vendors included a wall splash of their customer base. Much more prevalent this year was specific retailer technology demonstrations inside vendor exhibits. Examples included Staples and 1-800-FLOWERS in the IBM exhibit and Under Armour with JDA.

This trend is a good sign as it implies deeper partnerships between retailers and technology suppliers in solving industry problems.

Mobile is SO Yesterday

As late as 2016, you could find very large smartphone screens demonstrating the latest retail apps. Both the Holiday 2016 shopping data and disappearance of the mock smartphone screens at NRF 2017 confirmed that mobile integration in retail is now table stakes technology.

"Black Friday (USA) saw 36% of sales generated from mobile phones, while consumers went on to spend a whopping $1.07 billion on their tablets and smartphones on Cyber Monday. That reflects a surge of 33% and 35%, respectively since last year."

The Cloud Rains on Retail

In 2016, 26% of retailers planned cloud software spending. For 2017, this number increased to 34%. For the North America retail market this is a $528 million increase. The ubiquity of cloud solutions at NRF 2017 confirmed this trend.

This year, I fully expected to see a lot more robot and drone applications. Pepper, a show favorite from last year was present, but the drones and robots did not invade the EXPO hall.

Latest IDC forecasts have robotics and related services doubling to $188 billion by 2020. The top four Industry sectors ranked in terms of robotics adoption are manufacturing (more than 50%), resource industries, consumer, and healthcare.

The cool tech factor was less visible at NRF 2017.  Great to see more technology companies focused on solutions and not just products. Retailers were engaged, asked a lot of questions, and were more open to directly partnering to solve industry problems. 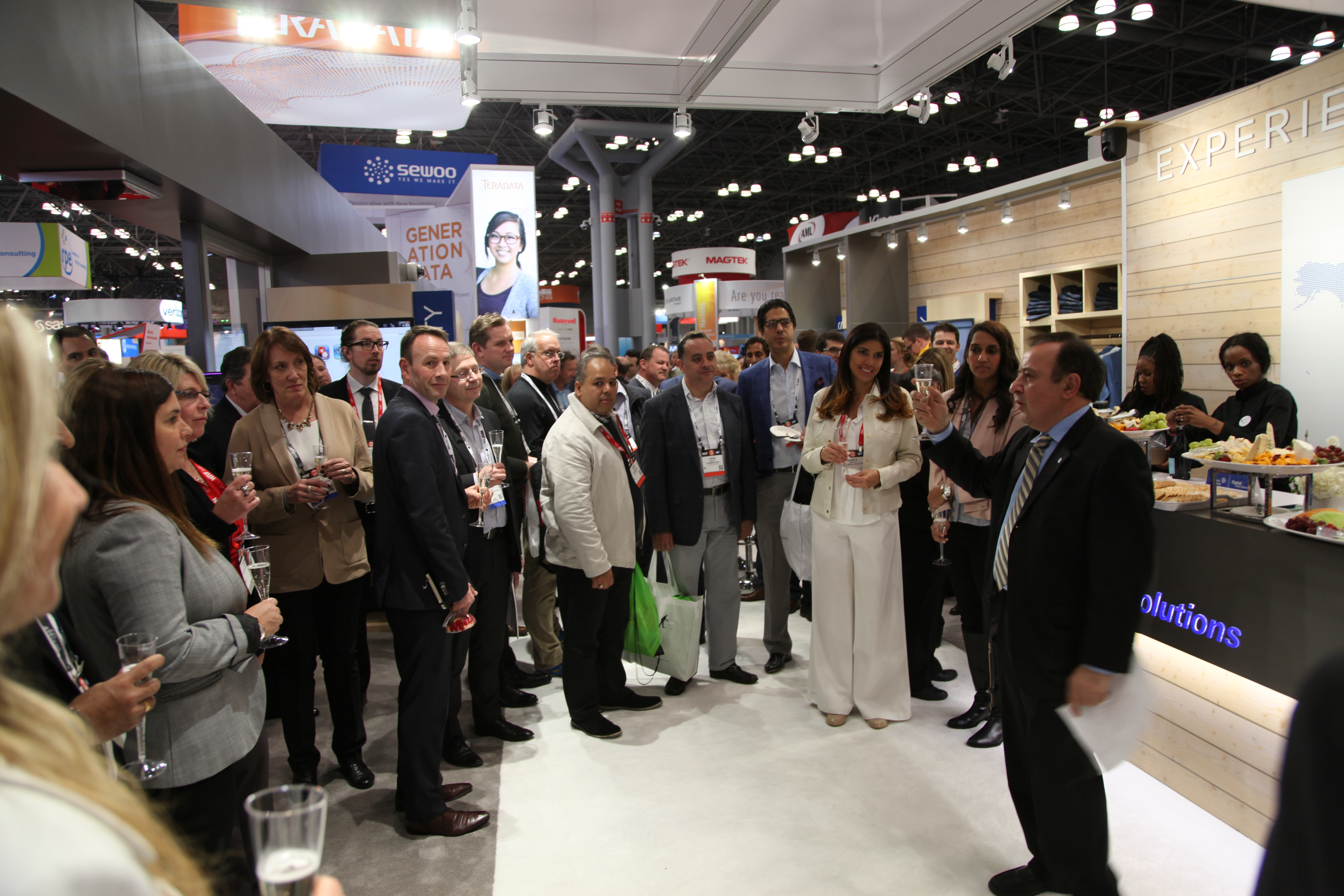 In the Tyco Retail Solutions exhibit, I had the pleasure of delivering a champagne toast. My comments echoed the just concluded USA growth holiday season and the unified vision that technology companies and retailers need to share to counter the increased disruptive industry trends.

Thank you NRF for the glaring reminder that success in retail is a team sport. Happy New Year Retail.