Drowning in INFORMATION, Starving for KNOWLEDGE

This week's favorite post was a reminder of one of the initial books that started my personal journey in trying to decipher future technology and retail trends by tracking key global indicators and industry influencers. The title of this blog is actually from a quote in John Naisbitt's book Megatrends. His exact words were that "we are drowning in information but starved for knowledge". There are multiple parallels between this past week's favorite post, Naisbitt's book, and emerging retail data trends.

When Naisbitt's book was published in 1982, personal computers were becoming widespread for the first time. Eight inch floppy disks were the common information storage technology. PC monitors were mostly black and white. The mouse was still a joystick. Telephone modem technology was starting to be used to connect to online information services and bulletin boards. No one had yet really heard about the internet. Naisbitt's key predictions (*):

This past week, the web site Business Insider published "The Megatrends that are Changing Retail Forever." Most of the retail predictions are spot-on and amazingly some of them still have linkages back to the original megatrends published by John Naisbitt thirty years ago. Summarizing the retail megatrends with some additional industry data:

Both John Naisbitt's initial predictions and also this past week's retail specific megatrends are good examples of the historical continuum being driven especially by technology. Chose the opening quote on drowning in information because retail is on the verge of a new information explosion. Multiple of the retail megatrends above plus RFID promise to bring high granularity to the shopping experience. Think "Big Data" requiring a lot more storage and number crunching capability. Successful retailers will prioritize the information treads that support the core value of their brand. Success is a journey built on a core set of principles that continuously build the core value of the brand. Want to understand and predict the future of your brand, then listen to John Naisbitt when he also said "The most reliable way to forecast the future is to try to understand the present."

"Carpe Diem" this week to leveraging your megatrends to success. 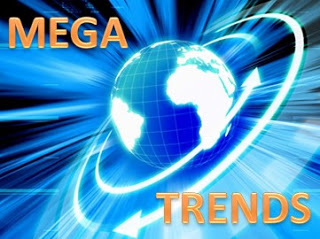