The Real ROI in Retail RFID

As we are near the end of 2012, let's start this week's discussion by revisiting the Apparel Magazine 2013 RFID retail predictions that were published in the October personal post "RFID's Moment of Retail Truth" (1):

Based on new RFID industry data distributed last week, it is time to revisit this technology and discuss the real ROI opportunities for retail. A couple of weeks ago, the web portal "RFID 24-7" published the article "Momentum Builds for Retail RFID in 2013." Highlights included (2):

As multiple posts have previously pointed out, focusing only on the technology and not on the problem it is trying to solve is a recipe for failure. This summer, IHL published an updated study on retail inventory distortion (3).

The data from the IHL study very clearly points to where the real ROI can be found in retail RFID. It starts with clear focus on driving inventory visibility and accuracy in the store. It ends profitably at omni channel retailing.

In 2012, Tyco Retail Solutions issued a white paper titled "Inventory Intelligence, Unlocking Onmi-Channel Retailing and the Future of the Store". Key insights from that white paper (4):

Retailers that are focused on the "Real ROI in Retail RFID" are not fixated about RFID as a technology. They are responding to the increased pace of retail change where the definition of the store is no longer only the physical brick and mortar building. Mobility, social media, growing internet shopping make it possible to shop in a 24 hour cycle, often by instantly reacting to increased social stimuli from interacting with an ever increasing global circle of friends. Retailers that make all their physical inventory assets available for sale, no matter where they are located, have a clear advantage in fulfilling the faster pace of demand from connected consumers. Inventory visibility and accuracy are the foundation elements for this faster journey.

Retailers that are focused on the "Real ROI in Retail RFID" clearly understand that the technology journey to improve store operations is best approached through a series of adoption layers, each delivering core ROI elements that drive further investments to continuously improve performance. Multiple of the global retailers that are successfully deploying RFID to improve inventory visibility and accuracy are primarily focused on the following two initial technology layers:

Opportunity exists for continual improvement beyond these two initial deployment stages. In future posts, we will discuss three additional technology deployment layers for RFID (including Loss Prevention). Focusing on all five layers of RFID technology at the same time is a not a recipe for success. The reasons are very simple. Each additional technology deployment layer adds complexity and more importantly cost. The intensified cost structure means an extended ROI model. In today's retail environment, a longer ROI is a major challenge. 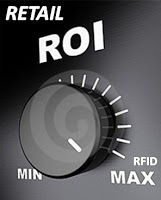