"With high hopes for the future, no prediction is ventured." - Abraham Lincoln

On March 4, 1865, the above words were spoken by Abraham Lincoln in a short, yet very powerful speech given on the day of his second inauguration as President of the United States. As backdrop to this speech, Lincoln had just won a major legislative win in passing the 13th Constitutional Amendment abolishing slavery (as dramatically depicted in the current Steven Spielberg movie) and the Civil War raged on taking over 620,000 lives (the most of any war in USA history) by the time it ended in April 1865. The same month the war ended, roughly one month after this speech, Lincoln was assassinated.

The context of Lincoln's speech and the quote selected are important, especially as we think about the many global challenges surrounding all of us today. Unbelievably, 2013 is about a month away and in this blog, with high hopes for the future, we will venture to look at some general predictions and also a few specific to retail.

Let's start with the top 10 general 2013 predictions published on November 12, 2012 by the non-profit World Future Society (WFS.org). These forecasts are typically within a 10 year time frame window and feature a diverse mixture of business, economics, demography, energy, the environment, and health & medicine topics.

This blog was inspired by the short survey conducted by Kurt Salmon with 100 retail executives on their top priorities for 2013. Here are the results from that survey (**):

The Top Retail Priorities for 2013 are:

The Areas Targeted for the Largest Capital Expenditures for 2013 in Retail are:

With this industry data as background, here are the 2013 top 10 predictions for retail:

The above 10 trends point to a Store Revolution underway in retail. The physical limitations of brick and mortar stores are breaking down at an accelerated pace. In Western Markets there are too many stores and the winners will be those that focus on building an engaging onmichannel customer experience. New store growth will be primarily in emerging markets. As already seen in market such as China, technology trends that took decades to evolve in the West, will arrive in the emerging markets at an accelerated pace.

Major challenges surround all of us, especially in Western Markets. Multiple industry / global events could derail the optimistic trends above. With high hopes for 2013, it is time to venture forward towards a hopeful future. Think back to the world that Lincoln lived in as he started his second term as President. For the United States, it was a very tough environment from which to positively look forward, much tougher than today.

As Peter Drucker once said, "The best way to predict to future is to create it." Make the end of 2012 a time of reflection / planning for creating a very successful / healthy / prosperous 2013. 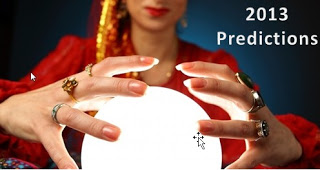 What Happens To Unspent Gift Cards? -CNBC
The plastic cash substitute has been the most popular holiday item on shoppers’ lists for 13 years in a row, as of 2007. -from CNBC Read more