Success Through The Art of Storytelling

"Over the years I have become convinced that we learn best --and change-- from hearing stories that strike a chord within us....Those in leadership positions who fail to grasp or use the power of stories risk failure for their companies and for themselves." - John Kotter, Harvard Business School

One of my favorite traditions every year is to watch the American Super Bowl, both on the personal level for the game itself, and professionally to view the latest batch of TV commercials. Some quick statistics on this year's XLVII edition (1):

The costs and audience for this annual sport event make it not just a football game, but also the Super Bowl of TV commercials. Consider (2):

Post the game itself, my other favorite activity is dissecting the patterns being used in the latest set of commercials to understand the evolution of effective communications (as it is getting impacted by technology changes). One barometer that is a good indicator are the top commercials as measured by audience response. This year, the top 3 ads that received the highest audience score in the USA Today Ad Meter were (3):

The following communication themes were prevalent in each of these three winning ads:

A surprise additional barometer for the top 3 ads this year is their current viewership on YouTube:

The key effective messaging takeaways from the above data and this year's flock of Super Bowl XLVII top ads include:

"Stories build connections, explore ideas, ask questions, and establish relationships. They are extremely powerful by nature -- but the most effective stories are intentional.(4)" A weaving tale with a clear message that builds on each step in your presentation leaves a lasting impression with the audience. To succeed on your storytelling journey, following these three simple steps (4):

John Kotter was correct. We do learn and yes we do change from hearing stories that strike a chord within us. As a leader, it is time you grasp the concept of story telling, practice it, and deliver it with passion. Transfix your audience by taking them on your storytelling journey to a defined call to action to win in the game of life. 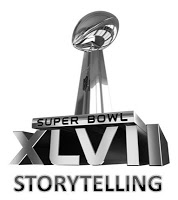